Riding, at any level, is often a more mental game than physical. That’s true for me, although lord knows I have plenty of physical limitations and struggles (will I ever learn to sit up? chances are low).

Mental toughness has been in the forefront of my riding in the past several years. I knew that I couldn’t be wimpy, and had to learn to believe in myself and my nerd horse to do things like tackle the jumper ring and move up to 2’9″. We definitely had stumbles due to my overarching paranoia and adult amateur chicken-shitness, but we also conquered a lot of hurdles. I’m proud of that.

The mental game that I entirely forgot about is the one of having a green horse. In the past year, I’ve been able to show up to the barn angry or on the verge of tears from my life drama and Simon would just take care of me with 0 complaints like he always does. He has the unique ability to soothe my soul the way a heart horse does, and every ride with him would leave me feeling refreshed mentally.

With Roman things are different. In truth, it’s partially because I’ve forgotten what it’s like to have a green horse – you know, the whole two steps forward one step back process. I also have been unable to trust Roman like I trusted Simon on day one. Part of me thinks it’s the transition from riding my beloved heart horse (who’s still in the barn and watches me struggle on the giant beast) and part of me thinks that Roman is going to be a different kind of horse for me than Simon was/is. Different doesn’t mean bad, but it is an adjustment. 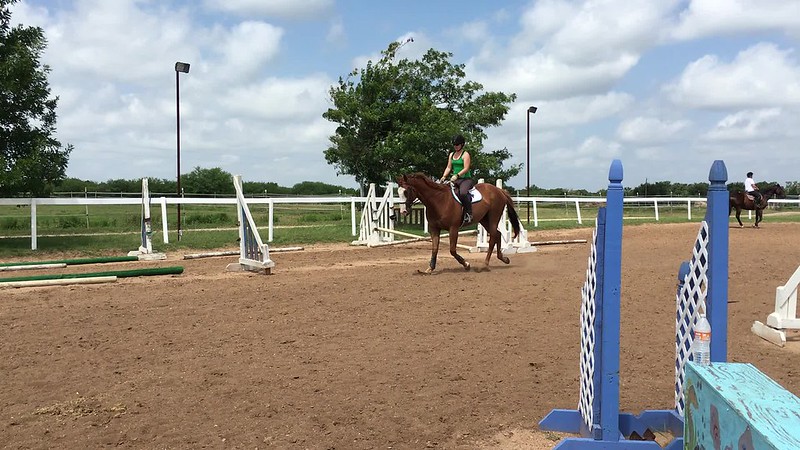 Last week with a friend in the irons

This week has been less than ideal for me for a variety of reasons I won’t get into, and I’m having a harder time than I usually do. On Monday, I drug myself and my shitty attitude to the barn. A ride will make me feel better, I thought as I started lunging my green horse the way my trainer has been teaching me to improve his balance. Roman had a few days off due to my binge drinking social plans over the weekend and was rightfully a bit fresh. He bucked and hopped and generally was super distracted on the lunge line.

Here’s where the green horse trainer should have said, “You know – today looks like a great day to focus on lunging and groundwork.” Instead, I climbed on and expected the same quality of ride I had enjoyed the previous week.

Spoiler alert – it was not the same quality ride. I will say that Roman was not being bad, but instead green & squirrely. Nothing I can’t handle by any means, but my attitude was not in the right place. Instead of being patient, I got annoyed. I focused on the negatives instead of nurturing the positives and was continuing to feel quite rotten about life when my giant creature tripped and went alllllll the way down.

I rotated forward off his neck, landed on my shoulders and rolled over on my head. My first thought after getting up was, “This is why they make helmets” because my entire brain felt compressed for about thirty seconds.

To Roman’s credit, he was extremely polite about the incident. He didn’t run away or play, but instead made sure to not step on me and snagged a mouthful of grass while I re-assured him that he wasn’t an evil pony and picked the reins back up. I got back on, and quickly finished my ride in the dirt ring with a sore arm.

Even though my fall wasn’t caused by Roman being bad, it really shook me up. While Roman sat under the fans to cool off after being hosed, I slinked into Simon’s pasture. He whinnied to me like he always does, and I sobbed. I cried because my arm hurt. Because I got scared. Because getting used to new horses is hard. Mostly though, I sobbed because getting used to my new life is both hard and scary and I had all that mental baggage with me at the barn that day. While I cried I gave Simon (and his brother O who was also there for moral support) cookies. I let him lick my hands, nuzzle my pockets, and scratched all his itchy spots. I leaned my cheek against his neck, soaked him in and felt better.

Even though I was moderately sore, I pushed myself to ride Roman again the next day. I told myself that equestrians fall off, and they get back on. A tripping horse is not a bad horse. My new horse is going to be a product of me and my decisions, so they needed to be good ones. I showed up to the barn as mentally tough as I could be, and I had a lovely ride.

29 thoughts on “The Mental Game”