Lucie is one of the quirkiest dogs I’ve ever owned. Her biggest quirk? Special treats.

I’ve always heard that dogs buried bones, but I never saw it in real life. Every dog I’ve ever had has gratefully taken a special chew, treat, or bone and ran off with it to eat or chew to their heart’s delight. But not Lucie.

If you give her a chew bone she will do one of three things with it:

Some things she’ll chew with regularity. Peanut butter stuffed hooves always get chewed. But the rest it’s a total toss up. If I give her something that’s enjoyable, say a dental chew, but not her absolute favorite she might chew it or she might walk around the house looking for somewhere to bury it. Her favorite burying spots are in the couch, where she’ll “dig” and move all the cushions and then “cover it with dirt” with her nose. She also will bury things in the toy box, in the blankets of my couch, and randomly in the corner of my office (which makes no sense). Many, many things get “buried” this way. She typically will go chew them an hour or so later.

The same thing happens with food. I discovered this when I once gave her a piece of deli meat turkey, and then found it buried in the blanket on my sofa hours later. So now when I give her food, I literally have to tell her “Eat it!” so I don’t end up with rotting food scattered around my house. Since she realized I stay and watch her until she swallows, she typically saves the hiding behavior for her chews and bones. Usually.

Now if something is really special, the present actually brings her some level of mild distress. Lucie’s favorite treat is something called an Everlasting Treat Ball/Bento Ball. It’s like a super hard packed cookie that goes in a rubber toy. The cookie lasts a long time, and the dog slowly licks/gnaws it away. I’ve got them on subscribe & save because she loves them so much and they’re the perfect enrichment item for rainy days or times when I’m going to be away from the house for a long time.

When I give her one of these (or a smoked bone, which she also adores) she eagerly puts the treat in her mouth but then paces around the house crying. It’s like she can’t decide where to hide it. No place is safe! She’ll carry it around, crying. She looks at me with it in her mouth and cries, as if I bestowed too great of a responsibility on her. This can go on for days. She’ll stress at the perfect place to hide it, hide it, and then finally chew some until she wakes up the next day to hide it again and repeat.

So, what does all of this have to do with a potato?

Yesterday morning, I dropped some scraps on her food. Mostly bread crusts, but also a little square piece of potato. Since she usually eats food out of her bowl like this, I think nothing of it. I get to work on a busy morning, but later realize she’s digging in the couch from my office to hide something. That was strange, because I hadn’t given her a bone and I didn’t see anything in her mouth. Then I looked closer.

I gave it to her, asked her to eat it, and she just closed her mouth over it to go hide it somewhere else. See video. 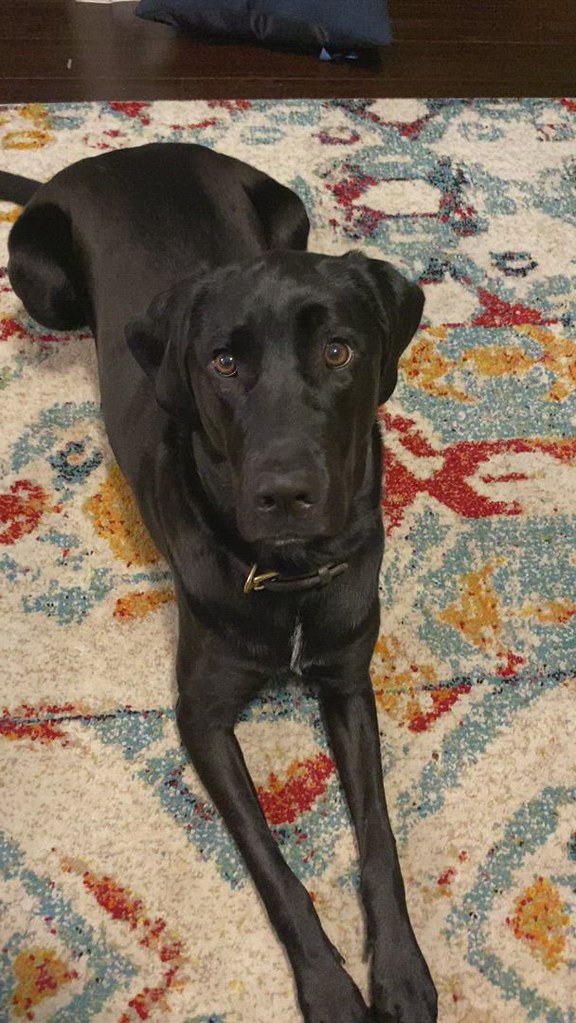 This continued for quite some time. She never ate the potato, at least as far as I know. Distracted by a squirrel in the yard, she couldn’t decide whether to hide the potato or chase the squirrel so she put the potato in her mouth to run outside and then either dropped it or perhaps swallowed it without even knowing.

We’ll never know the full truth. I sure do love this nutty, goofy dog.

8 thoughts on “Lucie and the Potato”