I didn’t plan on horse showing much, if at all, when I moved Simon to California. That seemed like a luxury far beyond my grad school life, but I keep re-learning two simple truths with riding: I’m competitive as all get out, and I like to have goals.

Luckily, my barn has its own four show series that awards year-end awards as well as counts for my local circuit points. At home shows in my barn? That was too good to pass up. We missed the first one in March because Simon simply wasn’t quite ready to go. We were still getting him good to go health wise, and an abscess two weeks before rendered me unable to get enough lesson time to competently get around the ring with my trusty OTTB hunter.

You heard that right — hunter.

See, when I took my first lesson with my new trainer, she asked what my showing goals were. I told her that in a perfect world, Simon would be a three ring horse. He already kind of was… but not if you count actually winning in all three rings. I admitted to her that I loved the hunters, but that he hadn’t been able to be successful in the hunter ring. Maybe my trainer loves a challenge, or maybe she saw something in him that others hadn’t, but she started hunterizing Simon and we’ve stayed away from the jumpers all year.

I couldn’t be happier. My brain does not love the jumper ring, but was it a successful transition?

The May show was the second of the series, and I signed up without feeling completely ready. Truth is, I rarely feel ready for a horse show, but this time was especially bad. I hadn’t been jumping many courses, and it’d been over a year since my last show (the hunter derby in Austin).

To boost my confidence, we entered in the 2′ adult division instead of my normal 2’6″ stuff. Additionally, I had the trainer ride him in the 2’3″ Thoroughbred Hunters, because I always love to support a TB only division.

Because I’m me (aka a total spazz and nervous wreck), I went off course in my first 2′ hunter round… even though it was probably the simplest course in the world. After I screwed my head back on straight, we went in for the 2′ equitation and won the class. That put a big smile on my face, and I decided to scratch the under saddles for that division since we were out of point contention from going off course.

Instead, I saved my energy and rallied to compete in the 2’3″ IEHJA medal class, which is one of the local circuit’s qualifying classes for their medal finals. Truthfully I don’t remember a ton about how the class went, but it must have been average. We pulled 3rd, middle of the pack, and I handed the reins over to the assistant trainer for the rest of the show.

He gathered an assortment of middle range ribbons in the Thoroughbred hunters, but I was most excited about the flat class. Historically, Simon is not a flatting kind of horse. Let me remind you what this has looked like for us in the past:

However at the May show, he settled down and did the job for a 2nd in the flat! With me riding! Like a real hunter! This is when I decided my horse would stay in training forever, and had a glimmer of hope as a hunter.

The July show was the only horse show Simon’s competed in where I didn’t actually ride. I was still less than 30 days out from my knee surgery (still need to blog about that), and wasn’t back in the saddle yet. My trainer took him in the 2’3″ Thoroughbred Hunters and the 2’6″ Low Hunter division.

It was a very mediocre day. He did the job, wasn’t the judge’s favorite and got middle ribbons in small groups. The highlight was a 1st place in an under saddle class, but truthfully I think all the other horses just kind of exploded or something. It was a default kind of blue ribbon, but hey – counts!

By the time I got back to riding after my knee surgery, I was dying to go horse show. Simon got better and better, and I had an itch to get him out in front of a judge to really test how it was all coming together. So I pulled money out of my ass and put him on the list to go show in Norco over a weekend at one of our local circuit’s shows.

Around now, I was feeling more confident in the saddle and didn’t feel right staying in the 2′ division. So I abandoned my goals of getting great year-end prizes (changing divisions mid-year is generally frowned upon when it comes to giant ribbons), and moved back to the 2’6″. For the show, I signed Simon up with the trainer for the pro 2’6″ and 2’6″ Thoroughbred divisions and me with the 2’6″ Low Ch/AA hunters, equitation and the 2’6″ IEHJA medal (versus the 2’3″).

Saturday was one of those magic kind of days where everything clicked. Trainer took him in first, and did all the schooling she needed to for changes and obedience. It wasn’t beautiful, but he did the job and got several 3 out of 3 ribbons. Which was disappointing to watch, but amazing to feel when I took him in for my rounds.

Though Simon was not, is not and may never be an auto change kind of hunter, he is doing his changes now. For day one of the show, trainer prepped him so well that he got full, clean changes in one corner for me several times. That plus staying on course gave us one beautiful round which earned a blue in a competitive Low Ch/AA hunter class.

Guys, horse showing is always fun, but who knew it was so much more fun when you win?

Also on Saturday I did the 2’6″ IEHJA medal, and we got 2nd… out of more than two! It was the first time in my life that I trotted into the ring and though, if I do the job correctly, I have a chance of winning. 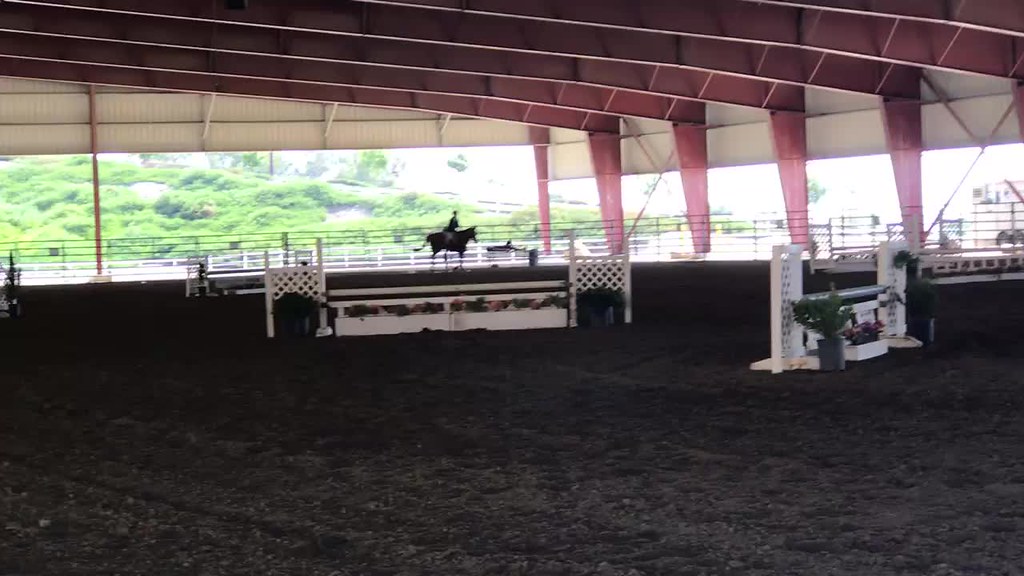 Of course on Sunday, both the horse and I were tired and things fell apart a little bit. The lead changes disappeared, and I chased him down the lines. So it wasn’t as pretty, and I begged my trainer to let me scratch my flat classes because I didn’t think I could make my horse behave enough to hack… but we still squeaked out a reserve champion for both the 2’6″ Low Ch/AA hunter and equitation divisions.

I felt super confident before our final home show. One might even say cocky, which is a recipe for disaster. We switched divisions again, and kept me in the 2’6″ Low Ch/AA Equitation with trainer doing him in the 2’9″ Modified Hunters. It was a good plan, however it put all my divisions before my trainer’s.

And that’s when we realized Simon needs a pro to do his first rounds at the show.

I rode poorly. I fought with him, yanked and didn’t release when I needed to. He ignored my attempts at aids, refused to give any semblance of a change (when we usually get several clean ones in our lessons) and ran around chipping flat to every fence. It was fugly. I got last in both of our equitation over fences rounds… and rightfully so.

Coming out of the ring, I was almost in tears because I was so frustrated with myself. I said I should hand him over to assistant trainer so I wouldn’t mess him up any more. She came on to do a schooling round, but both trainers encouraged me to pull myself together and brush off the bad rounds. My trainer is really good at identifying how complicated my brain is, and she encourages me to take every fence one at a time.

So I let him chill, and did the flat medal class — getting 3rd out of 6. Then I came back for the 2’6″ medal that I was working to qualify at finals for, and actually rode my horse properly. After testing, we ended up 2nd which gave us enough points to qualify for finals. I got off feeling much better, finally doing right by my horse.

The 2’9″ pro division that day was whacky. The best, pretty much unbeatable horse had an off day, and the judge liked Simon. He won both over fences rounds, and when I got on to hack him (trainer hacked the other horse) for the under saddle he ended up winning that too. So let me go on the record and say that Simon did a clean sweep of a hunter division against Warmbloods. This will probably never happen again, but we sure did enjoy our tri-color!

That show also awarded the show series year end prizes. Since the 2′ adult division is low attended, we managed to hold onto 2nd place from our 1st blue ribbon in April — which got him a fancy reserve ribbon and a key fob. He also racked up enough points from his stellar day in the 2’9″ pro division that he ended up reserve in that as well.

With those four shows under my belt, I decided to splurge (and again pull money out of my ass) and put him on the list for the big local circuit Fall Finale horse show… but that will have to be its own post!